In this week's installment of Bastard Costa Rican Wildlife, we are going to be looking at an animal so horrible and so nightmarish, that I hate to even feature it for fear of scaring away any potential visitors. I want it to be made absolutely clear that boyfly infection in humans is quite rare. However, when it does happen, it's probably one of the most nightmarish things that could ever happen to somebody.... 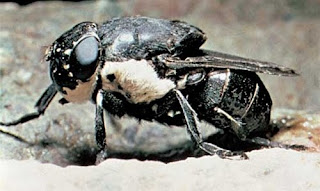 Most people hate bugs, and I don't think anyone outside of the most dedicated entomologists can say that they love them. But this week I have creature so ass that it's actually worth looking at to completely obliterate it from our planet and send it into the great species afterlife where can try its luck at screwing around with T Rex. I'm talking about Dermatobia hominis or the human botfly. If you have ever seen a horror movie where someone is infected by an alien parasite, that comes reasonably close to being infected with botfly larva.

This tiny little jerk actually attacks and infects mosquitoes with its eggs because it's too much of a coward to do its own dirty work. They know we just want to shoot them in their stupid little botfly faces. They have a range that stretches from Central Mexico to about Argentina, and are most abundant in wet and miserable locations where pie is only a legend and the people try to stay as drunk as possible in hot rooms with comically slow ceiling fans. Seriously, what's the point of having one if it's not going to do it's job? Yet just about every Costa Rican cafe or bar in the more remote places has one...meh...starting to digress. 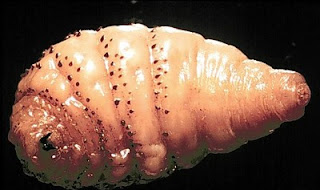 So basically one of the worst experiences of your life starts out like this: You are camping in the rain forest because somehow either through work, school, or listening to too much hippy music, someone convinced you that it would be a good idea. Somehow through the night, you were not devoured by a jaguar or stripped to the bone by army ants, but the mosquitoes really did a number on you. Bah, what's a couple of skeeter bites right? This was an adventure! Well, a few days later one of the bites starts to look pretty bad and is starting to actually get a little painful. You then go to the doctor and he informs you that you are in fact pregnant with an enormous spiked maggot that will eat you from the inside out until it either matures (6-8 weeks) or someone gets it the hell out of you.

The problem with getting it out of you is that this thing is covered with spiky spines to keep it anchored inside its host. I can't imagine how painful and how freaky it must be to have one of these big fat things stuck in your body. One good thing about this horrible crime of nature though is that it drove Stephen Baldwin out of Costa Rica, possibly for good. Below are some videos of this bastard and his handiwork...

I am a vehement animal lover....but I hate these things. I never go into the jungle without long sleeves and plenty of insect repellent. And I never, EVER go camping in the rain forest. It's not like the sylvan pine forests up north, and I would rather go toe to toe with a bear than have even one of these ghoulish things in me...
Posted by Aaron M. Gipson at 10:01 AM

These f-ing things make me sick. We watched a show called "Monsters Inside Me" and this guy had them in the back of his head. Creeeeeepy!!

Those videos were disgusting, but I could not stop watching haha.

Had heard of them but not actually seen them in action or their handiwork, bloody vile things.

geez these botfly extraction vids on youtube are so scary. i never want to come near this things in my life

OH, FUCK THAT!
As if I didn't need another reason to hate Central America.

I think I worded that last comment wrong...As if I needed another reason..blah blah. sorry.

That was better than any freaking horror movie and as beautiful as that area is, I'm so glad I live here where we only worry about black widows and rattlers and scorpions--at least they face you when they attack.

the second video is scary... im scared of these things!

the second video is so scary. im scared of these things!

Damn nature, you scary. Also, I will now soak in gallons of insect repellant if I go anywhere near the American rainforests.

im ok with bugs except spiders

this is one of my favorite blogs

Botflies are nasty. Would not want to have that anywhere near me.

I don't want to get near that thing.

your post always make me laugh... yet the fly have a purpose in nature and is beautiful to me.

ZOMG, I will NEVER go to costa rica now...that is sooo gross.

Man that is gross but I couldn't stop watching the videos for some reason lol.

UGH UGH UGH, I need to shower after this...seriously, aUGHGHHG.

scary stuff, how am I suppoded to sleep now

I've got a zit on my shoulder/back that was bothering me before. After seeing that, I want to grab a blade and start carving chunks out.

I love bugs, but these are pretty horiffic!

Fffff, that was too scary...if I ever visit Costa Rica I'll follow your tips.

wow that is quite creepy

Sometimes when I get bored I go on youtube just to watch botfly removals. I'm not joking.

Insects: some of the most vile of nature's creatures.

A bear definitely sounds easier to handle than this.