Before I start this post, I'd like to place a little friendly wager. I'm willing to bet 1000 internets that any male reader of this post will have crossed their legs at some point during it. It's that bad...

This is an animal is an abomination. In fact, for years, zoologists denied the existence of this prick based completely on the fact that they automatically presumed the people telling the stories of it were either high or just reciting folklore. In other words, scientists could not believe that any animal on the face of the planet could go this far at being this evil and loathsome. As cruel as nature was, there was always the balance, right? Not with this little fuck face, no...

The Candiru (Vandellia cirrhosa) is a small parasitic catfish that seems to have originated in the Amazon basin and crept its way up as far north as Guatemala. And though no one is sure how the hell they got there, reports from the Queensland government in Australia show that it has made its way there as well. No one is sure why this species is spreading at such an alarming rate, maybe it's a sign of the apocalypse, who knows? But it is spreading, and certain lakes and rivers here in Costa Rica have become breeding grounds for them. And this species is the very same species that carries the odious nickname of "the dick fish".

It's normal prey are fish which they stock from the bottom. It has evolved a very accurate method of targeting its prey by the nitrogen and uric acid discharges that come natural for creatures that use gills. Though normally slender and wormlike in appearance, it has a set of retractable spikes along its back and on its head that it uses to latch on to the gills of prey and/them open until they begin to bleed. The little fucker then gulps down as much blood as it can and jets back down to the bottom were it brags to all of its friends about how much it just messed up a random fish that was just minding its own business. 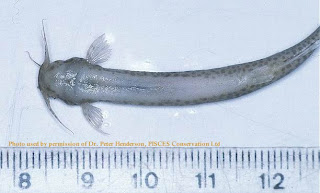 However every once in a while, a creature will enter its environment that has the amazing ability to send a concentrated and sustained flood of the chemicals the candiru can't resist. And that creature is a human being foolish enough to take a leak in any freshwater environment south of Mexico. The candiru, thinking a fish the size of the Sears Tower is slipping by charges fullbore at the source of those yummy chemicals and burrows its way inside of the human urethra. Fortunately, there have been no reported attacks on females, and it seems that the construction of the male anatomy and our preconceived notion that we can piss wherever we please make says ripe for the pickings to this little asshole.

Though it is possible to have this fish surgically removed, from the instant it enters the urethra, the victim is in unimaginable and inconceivable amounts of pain. Not really needing to, but just to be a dick, the candiru extends its spines from its fins, head, and back and begins to feed on every piece of soft tissue within its reach. Infection is almost immediate, and loss of that particular body part is often times unavoidable.


I hate this fucker, here's a video of the man who had once successfully removed....

Good grief but I cupped myself.

Every once in a while, I stumble upon a blog post that celebrates the goodness and beauty of the Earth, little proofs of the existence of a righteous God.

This is NOT one of those posts.

These things give me the creeps!!

I've seen these things on the Discovery Channel. Remember what I wrote yesterday about coming to Costa Rica someday? Yeah, never mind.

thats like, quite awesome to be hones haha(also aaron, long time no see)

One more reason I am happy to be female!

Jeez, I thought these things were only in the Amazon. Now I am afraid to visit the southern hemisphere at all.

Aaron about buttermilk here we dont, but I have a page of substitution things and they advise substitute buttermilk by light yogurt or sour cream that Im sure you have in Costa Rica, Normally I use light yogurt, work absolutely well,
How is the little twins???huggs gloria
The next week come my friend of Costa Rica. (she is from USA but live in Costa Rica)

i have no idea what this video or thing at bottom is (work blocks crap!). but, i have a feeling my weak stomach is glad i can't see it...PFFFT