Well it's a new Saturday and Holy Freaking Crap, I somehow managed to attract 200 followers! My thanks goes out to A Daft Scots Lass for her consideration. If you guys get the chance and want to see a blog that will keep you laughing and thinking, I can't recommend hers enough. She is also an international transplant like myself, being that she has gone from Scotland to South Africa in her life's journey. She's assertive, sassy, and like Autumnforest, really knows how to work the beautiful redheaded woman angle to the delight of her readers. And I mean redhead and not "ginger", the helpful picture below is for clarification... 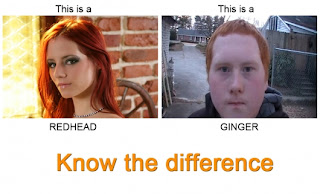 So I didn't post this weekend as you can tell, but this time it wasn't an attack or a tragedy of some kind that kept me from doing so.

For the first time in five years, I got to see someone from my old life in the States, and they were two of the most beloved people in that life. For those who follow my back story at all, my visitor was "the student from Deland" from the part entitled "Renaissance" and his beautiful wife. We hadn't seen each other since 1998, and when our circle of friends sort of went their separate ways, we tried to stay in contact but hadn't spoken since 2001 when he got married. Due to commitments, I couldn't make their wedding which has always been a source of a bit of sadness for me.

The night of their wedding, I called him up to congratulate him and told him that he and I would always be brothers for all of our days and that time meant nothing in that regard. Well 10 years later, on his anniversary, he just so happened to decide to take his wife to Costa Rica. We got in contact via Facebook and arranged to meet in Escazu where they were spending a night before heading to Tamarindo in the Pacific Coast. The hotel they managed to get was incredible and sitting on top of the biggest mountain in Escazu and overlooked the entire Central Valley.

So my best friend and I after ten years, got to catch up and make a couple of new memories on a gorgeous clear night with all the lights of the Central Valley thousands of feet below us. This is the first familiar face I had seen in five years (did I mention that?) and the experience has left me recharged and reaffirmed. I don't feel so much like I live on the moon anymore...

I hope your weekend was at least half as good as mine, and I look forward to a great week with you, my readers and friends.

All the Best,
Aaron

that ginger kid got owned on south park lol

Congrats on 200 followers. Keep it up!

Hey, thanks for the clarification between redheads and gingers. :-)
I'm so glad you got to reconnect with friends. I can kind of relate. I'm out here in the west, my family I have left is in the east. Since the divorce, my ex's family (who knew me for 31 years) completely ditched me, so I sometimes feel stranded in the barren desert. Two-hundred followers--not freaking surprised at all. You have a lot to say and the way you say it--you're a writer, you just haven't fully accepted that fate yet, but I will nag you to the ends of time to write a damn memoir in hard-back form.

There was never a saint with red hair. I'm always reminded of that proverb when I see the flaming locks.

gratz on the viewers

Congrtaz on the followers!!
Ginger girls = redheads
Ginger boys = Ginger, ging-er and definatley not strawberry blonde as my pal the angry lurker says he is!!

Congrats on the 200+ followers!

Redheads, beautiful but dangerous. Congrats on the followers and the great weekend.

Is there anything Facebook can't do? Glad you had a great time.

Good stuff for you this weekend - catching up with old friends and hitting 200 followers!! Congrats!

Remember people, Gingers don't have souls. Redheads not only have souls, but they're FIIIIINE.....

Mine was extremely challenging. Yours sounds storybook fabulous. I'm glad for you.

Thanx for the shout out by the way.

Glad you don't categorize me as a Ginger.

That is nice and sad too. Time makes all the friendship disappear.

LOL i just almost spit soda out of my nose when I read your explanation on ginger vs. redhead (im back to drinking soda unfortunately blah). Cracked me up!

Glad you got to see your friend and had a good weekend! WOOT WOOT!

So glad you had great weekend and didn't get mugged or anything! And also, you are awesome and that is how you got all the followers!! And the next 200!!

woohhhhooo congratz! i would love to invest in your blog, it's growing faster than any other investment ;D